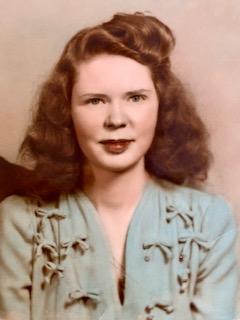 Carey was born October 26, 1923 in Piedmont, South Carolina. She was a daughter of Clifton Lee Garrett and Carey Geneva Poole Garrett.

She had a happy childhood and was one of thirteen children. She loved climbing trees, school, had many friends, and starred in her senior play as “Plain Jane.” She graduated from West Gantt High School in Greenville, South Carolina, in 1940. Shortly after graduating she married and left South Carolina because she “wanted to see the world”. From this brief marriage her son, Terry, was born. He was the love of her life. After returning to South Carolina, Lucille married Ford L. Lynch, they were married 44 years.

Lucille was a member of Augusta Road Baptist Church. She was an excellent cook, seamstress, enjoyed reading, having lunch with friends, bible study, talking on the phone, planting flowers, eating at Pete’s drive-in, going to Shrine conventions, taking a cruise, and had a wicked sense of humor. When she was in her early forties she learned to swim. She had a sweet-tooth and made a fabulous peanut butter pie. She was a beloved grandmother and fulfilled her granddaughter’s Christmas wish-lists, gave them huge hugs, and loved reading the Sunday comics page to them. Her granddaughters were blessed beyond measure to have a grandmother who loved them so much.

When she was ninety, she moved to Pawley’s Island to be close to her son. When she moved, she decided to be called by her first name, Carey. That's what made her special, she went by the beat of her own drum. She lived the last six years of her life at The Lakes at Litchfield. She made many friends, enjoyed bingo, making crafts, painting classes, and telling people she was from Greenville.

One of the last conversations she had before passing away was, “I have had so much love in my life because I gave so much love.” These are words we should all live by, to love one another and tell them often.

Carey is survived by her beloved son, Terry Najim and his wife Peggie; two granddaughters, who she adored, Amy Howe and Eve Slaughter, and their husbands, John and John; her two precious great-granddaughters, Olivia and Grace Howe; her dear sister, Joyce Ayers; special friends, Grace Kelley and Roxanne Baumann; and numerous nieces and nephews.

A graveside service will be held, Wednesday, October 21 at 1:30 p.m. at Woodlawn Memorial Park, Greenville, South Carolina. The family kindly requests that everyone in attendance wear a mask and practice social distancing.

In Lieu of flowers, memorials can be made to the National Multiple Sclerosis Society, www.nationalmssociety.org.

Condolences and “Hugs From Home” may be left for the family by visiting www.thomasmcafee.com.