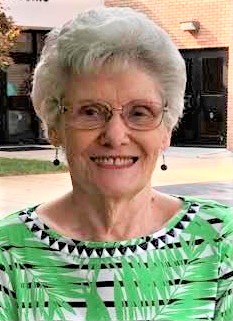 Cynthia Matthews Rush was born in Greenwood, South Carolina on October 27, 1932. She was the first child of Hubert Boyd Matthews and Louise Glover Matthews.

After graduating from Greenwood High School, she attended nursing school in Augusta, Georgia. Cynthia married William Austin “Bill” Rush on September 25, 1954. Bill attended Clemson University for the next four years. During this time Cynthia worked in the Infirmary at Clemson as her first job. Cynthia worked in doctor’s offices in Greenwood and hospitals in Macon, GA. She retired from Greenville Memorial Hospital where she worked as a surgical nurse for 15 years.

Cynthia is survived by her only brother, Buddy Matthews(Annette), her children Debbie Cathcart, Jerald Rush(April) and her 6 grandchildren; Austin, Mason and Kenzie Cathcart, Matt (Holly), Caroline, and Whitney Rush; as well as her niece Denise and nephews, Tony(Teresa) and Lee(Chrissy). Cynthia was preceded in death by her husband Bill Rush and her son William Craig Rush.

Cynthia and Bill were avid Clemson football fans and attended every home game for nearly 30 years until Bill’s death in 2005. They both loved their church, Edwards Road Baptist and have been members there since 1980. She was known as the “coconut pie lady” by the staff over the years because of her many homemade gifts to the pastors. Cynthia’s family and friends meant everything to her. Losing her son Craig to cancer in 2014 was a tremendous blow to her because they did a lot of activities together after our dad passed. Craig kept her involved with family and friends, taking her on fun vacations. Craig was also a nurse in surgery at Greenville Memorial. Her constant companion for the past 7 years has been her dog Magic, who brought her so much joy and happiness. Her favorite chapter in the Bible was Psalm 34. “The Lord is near to the broken hearted and saves those who are crushed in spirit.” Verse 18

The Funeral Service will be held Friday, October 15th at noon, at Edwards Road Baptist Church in Greenville, SC (the visitation begins at 11am). The burial will be held at 3pm at Greenwood Memorial Gardens, Greenwood, SC.

Memorials may be made to Edwards Road Baptist Church, 1050 Edwards Road, Greenville, SC 29615.

To leave a condolence, you can first sign into Facebook or fill out the below form with your name and email. [fbl_login_button redirect="https://thomasmcafee.com/obituary/cynthia-rush/?modal=light-candle" hide_if_logged="" size="medium" type="login_with" show_face="true"]
×