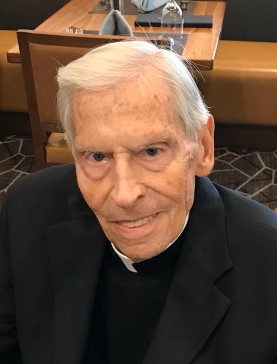 He was the son of the late George and Clara Seitz. He outlived all eight of his siblings and is survived by several nieces and nephews.

His undergraduate studies were at St. Jerome’s University in Waterloo, Ontario, and he studied for the priesthood at St. Bernard’s Seminary in Cullman, Alabama.

From 1985 to 1995, Father Seitz was pastor of Prince of Peace Church in Taylors, SC. After retirement in 2002, he lived in the Upstate until his death at McCall Hospice House of the Bon Secours St. Francis Health System.

His funeral was celebrated on August 17, 2021, at Prince of Peace Church in Taylors, SC. He was buried at Holy Cross Cemetery in Charleston.

Memorials can be made to Prince of Peace Catholic Church in Taylors, SC.

To leave a condolence, you can first sign into Facebook or fill out the below form with your name and email. [fbl_login_button redirect="https://thomasmcafee.com/obituary/father-paul-seitz/?modal=light-candle" hide_if_logged="" size="medium" type="login_with" show_face="true"]
×