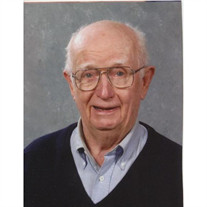 Hunter Park
October 26, 1923 - December 31, 2012
Print
Email
Hunter Park, 89, of Greenville, husband of Marie Gilliam Park, died Sunday, December 30, 2012, at his residence. Born in Greenwood, he was the son of the late Russell Hanahan Park and Lillian Hunter Park. Mr. Park graduated from Clemson University with a degree in electrical engineering. He was a veteran of WW II, having served as an officer in the Army Signal Corps in Japan. On November 17, 1956, he married Marie Moseley Gilliam of Statesville, NC. He was the owner and president of Gower Corporation and a member of First Presbyterian Church of Greenville. Hunter was a hiker, cyclist, and avid tennis player. He had a keen interest in education and served on the Greenville County School Board of Trustees. In addition to his loving wife of 56 years, he is survived by his four children, Marie Park, and spouse, Joe Hardt, of Dallas, TX, Russell Park, and spouse, Kim Halley, of Greenville, Missy Park, and spouse, Dana Tillson, of Berkeley CA, and Billy Park, and spouse, Julie Park, of Redwood City, CA; grandchildren, Alex and Sadie Hardt, Gillie and Leo Tillson, Zoe Park, and Bailey and Savannah Park. A memorial service will be held at First Presbyterian Church on Thursday, January 3, 2013, at 1:30 p.m., with visitation to follow in the Parlor until 3:00 p.m. Memorials may be made to Miracle Hill Ministries, 2419-B Wade Hampton Blvd., Greenville, SC 29615. To leave a condolence, you can first sign into Facebook or fill out the below form with your name and email. [fbl_login_button redirect="https://thomasmcafee.com/obituary/hunter-park/?modal=light-candle" hide_if_logged="" size="medium" type="login_with" show_face="true"]
×