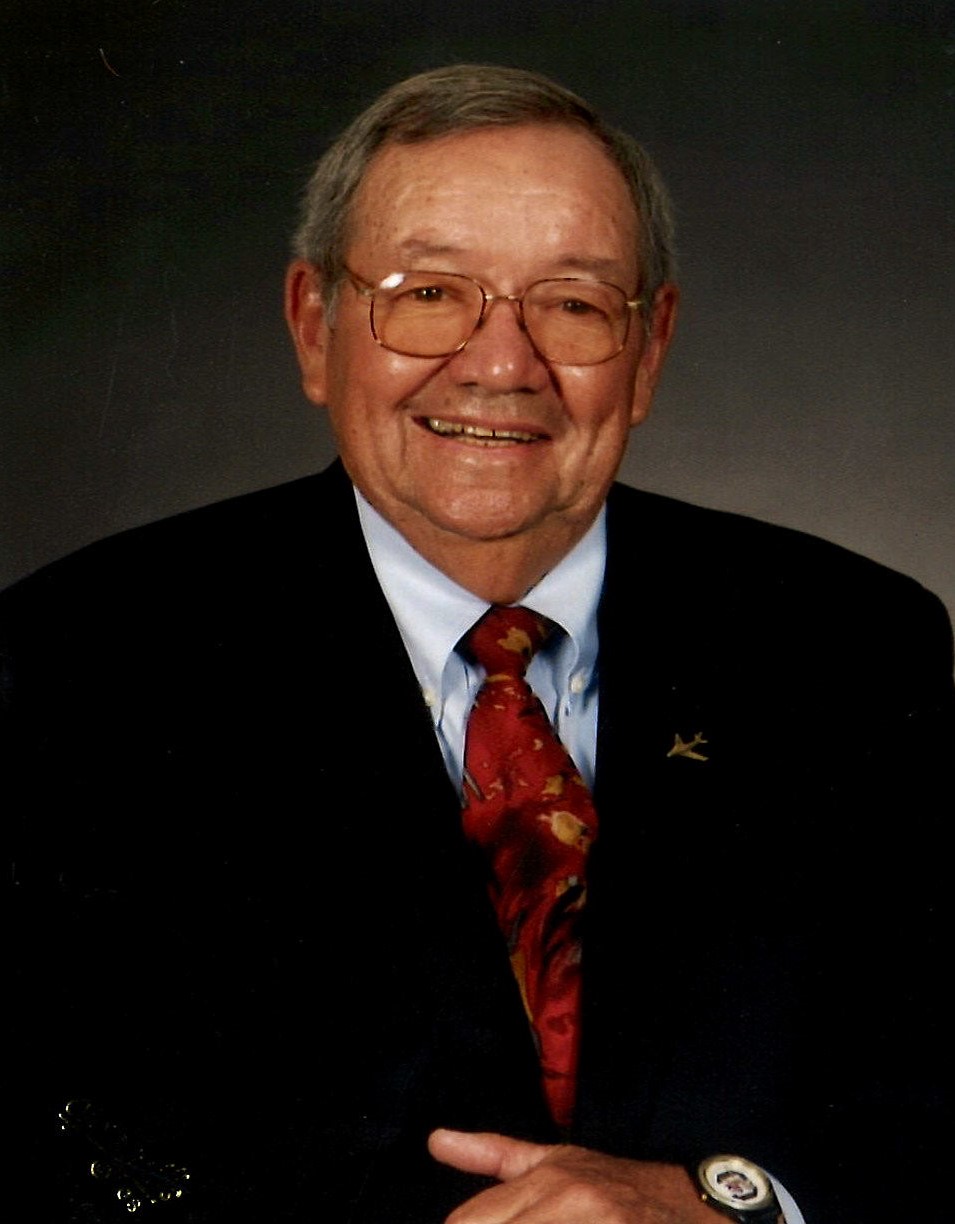 The family will receive friends immediately following the service in the Chapel until 12:30 p.m. The mausoleum entombment will be private.

He was a graduate of Greenville High School class of 1951, participating in all sports activities. He married his high school sweetheart, Gladys Miller, on June 6, 1953. He graduated from the University of South Carolina in 1955 with a B.S. in Mechanical Engineering. He was a member of the Sigma Chi Fraternity and the Block “C” Club. He was a letterman in track and field as well as a trainer for the football team.

Upon graduation, he served three years in the U.S. Air Force. He went through pilot training in class 57-B and flew F-86D Sabre jets out of Misawa, Japan with the 4th Fighter-Interceptor Group of the Air Defense Command. He returned to the states and joined the N.C. Air National Guard Reserves in Charlotte for the next four years. Combined, he logged over 700 hours of flight time.

Upon receiving an Honorable Discharge, he began his civilian career with Westinghouse Electric Corp., in field service sales, calling on design engineers and electrical contractors, in Charlotte, Raleigh, and Greensboro, NC and the Greenville/Columbia, SC area. Many Greenville construction projects utilized his expertise, with the Daniel Building being a highlight. His last assignment was in 1976, in Tampa, FL, where he rose to District Manager of the SE region. Having served Westinghouse for 40 years, he chose retirement in 1993 and moved back to Greenville, SC in 2005 with stops at Hilton Head Island and Lake Keowee.

He loved golfing all over the southeast (even a hole in one) but locally enjoyed the “Good Guys” and “Slick Moore Group”. Interests included boating, fishing, gardening, church activities, all USC sporting activities, including football, basketball, baseball games, as well as track and field meets; and growing up with his eight grandchildren. Favorite professional teams were the L.A. Dodgers and the Tampa Bay Buccaneers. He was a lifetime member of Buncombe Street United Methodist Church and the Round Table Sunday School Class. He enjoyed friends in the “Dixie Breakfast Bunch”. He never met a stranger!

His favorite memories include living in Preston Dormitory and the Block “C ” Club Dormitory, on the Horse Shoe and, of course, beating Clemson in football all four years while at Carolina (1951-1955). I can still hear track coach Weems Baskins hollering out, “Run it out, Reeves!” around the old track. Two of his children (Breck and Timothy) and six grandchildren have already graduated from USC.

The funeral service with military honors will be held on Saturday, September 24, 2022 at 10:00 a.m. at Thomas McAfee Funeral Home, Downtown. The family will receive friends immediately following the service in the Chapel until 12:30 p.m. The mausoleum entombment will be private.

In lieu of flowers, memorials may be made to Buncombe Street United Methodist Church, Congregational Care, 200 Buncombe St., Greenville, SC 29601.

Friends may leave condolence messages for the family by clicking on the button labeled “Leave A Message, Share A Memory” below.

The family will receive friends immediately following the service in the Chapel until 12:30 p.m. The mausoleum entombment will be private.