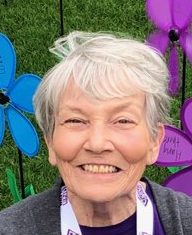 Judith “Judy” Ann Hultquist died on Saturday, October 22, 2022 surrounded by family at Rolling Green Village in Greenville, SC.  Born Judith Ann Hallquist on June, 24, 1943, she was preceded in death by her husband, John Willard Hultquist, Jr, and her parents, Oswald and Eunice Hallquist. She is survived by her children, Kirsten (Todd), Lea (Warren), John (Debbie) and Mat (Jennifer); her beloved grandchildren, Will (Emmy) and Maddie Agne, Drew and Claire Blanchard, Nathan and Joel Hultquist and Mathew, Lindsay, Jacob and Josh Hultquist. She is also survived by her sister, Janice Larson, brother, Jim Hallquist (Sue), sister-in-law, Marcy Hultquist, and several nieces and nephews.

Judy grew up in Red Wing, MN running around her family’s dairy farm.  It was in Red Wing that she met the love of her life, John.  They were married 54 years before he passed in 2018.  John’s job took them to Johnstown and then Bethel Park, PA.  They moved to West Chester, OH in 1975 and stayed to raise their family until they moved to Atlanta, GA in 1991. From there they saw all 4 kids get married and the first few grandchildren born.  They moved to Beaufort, SC in 2001 and vowed to never move farther north than Atlanta ever again…they had had enough cold weather growing up!

In every place they lived, Judy threw herself into volunteer work.  First, for all the kids and their schools as she served on PTA boards and headed up fundraisers and school trips.  She later found her aptitude for compassion as a hospital volunteer at Kennesaw Hospital in Kennesaw, GA.  John and Judy both loved volunteering for the churches they attended doing everything from assisting in the nursery to ushering to helping with Wednesday night suppers.  Judy took that a step further when they moved to Beaufort, and she took the classes and graduated to become a Stephen Minister for the Presbyterian Church. Serving in that capacity filled her soul.

Judy loved to read, knit, sew, garden, cook, and decorate.  Over the years, she belonged to several book clubs and gardening clubs, even serving as president of the garden club in Beaufort. In the beginning years of their marriage, Judy sewed all her children’s holiday outfits and costumes.  Later, she knitted scarves for all her family members and donated scarves as well as blankets. She had a good dinner on the table every night and her cookies are legendary.  She loved nothing more than entertaining and planning a party where she made all the food, drink, and decoration.  Judy’s homes were impeccable and could have been featured in any home/decorating magazine.

There will be a visitation on Saturday, November 12, 2022 beginning at 2:00 p.m. at Thomas McAfee Funeral Homes, Southeast in Simpsonville, SC followed by the memorial service at 3:00 p.m. in the Chapel.

Family and friends who are unable to attend the service can view the Live Stream by clicking on the “Watch Live Stream” button located on the main obituary page.