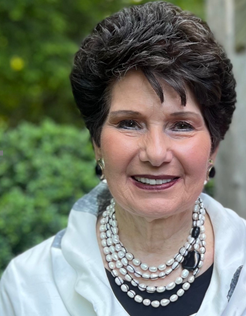 Lynn was born on July 12, 1946, along with her identical twin sister, Gwyn, to Sam and Grace Foushee in Durham, North Carolina. Lynn spent her childhood in Durham, graduated from Durham High School in 1964 and then received both her undergraduate and nursing degrees from East Carolina University. While working as a nurse in the Cardiovascular Intensive Care Unit at Emory University Hospital in Atlanta, she met orthopedic surgery resident Dr. John Rowell, and they married in 1972. After John finished his residency, they moved to Thailand where John served as a major in the United States Air Force.

Upon returning to the United States, John and Lynn settled in Greenville in 1974, where Lynn’s sister, Gwyn, was living with her husband, Dr. Vernon Anderson. John joined Piedmont Orthopedics, where he spent his entire professional career. After raising their three children, Lynn returned to work as a nurse in the Cardiovascular ICU at Greenville Memorial Hospital, from 1985 to 2005. She was deeply involved in the Greenville community. She was a member of the Greenville County Medical Society Auxiliary, Alta Vista Garden Club, The Junior League of Greenville, Beaux Arts, and the Carolinian Debutante Club. She was also a board member of Young Life and participated in many Bible study groups over the years, most recently Above All Ministry at First Presbyterian and Women’s Intergenerational Bible study at Christ Church Episcopal, her family’s parish. Lynn and John also spent many happy times with a close group of friends of 50 years.

As generous as she was with her time and talents in the community, family was always most important to Lynn. During their 50-year marriage, Lynn and John’s three children and their families were her pride and joy. They delighted in travelling to visit their oldest child, Dr. Erin Rowell, and her husband, Chris Schmidt, and their children, Henry, Caroline and James, in Evanston, Illinois; their middle child, Dr. Jonathan Rowell, his wife, Lara, and their children, Adelaide, Weber and Graedon, in Colorado Springs, Colorado; and their youngest child, Caroline Sasser, and her husband, Dr. Will Sasser, and their children Bo, Stella and Anne Carlyle, in Birmingham, Alabama. Lynn is also survived by her sister Gwyn Anderson and her husband, Dr. Vernon Anderson. Lynn and Gwyn had a bond that only twins can share; the Rowells and the Andersons were not just family but best friends. Lynn dearly loved her sister, Carolyn Duncan, and her husband, Tom, of Greensboro, North Carolina, and her brother, Sam Foushee, and his wife, LaRae Schneider, of Emeryville, California. She is also survived by numerous Anderson and Duncan nieces and nephews on whom she doted and loved.

Those who are unable to attend the service are able to view by clicking the following link: LIVE STREAM.