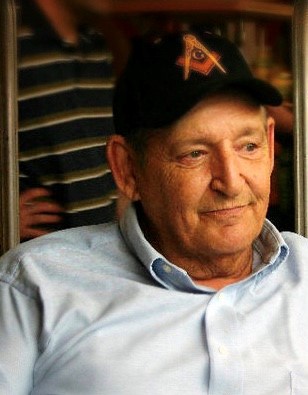 Michael (“Mike”) Evans Blackwell, Sr. passed away on Wednesday, August 26, 2020 at the age of 77. He was born to William Lewis Blackwell and Edna Evans Blackwell in Greenville, South Carolina on January 8, 1943. Mike was a husband, brother, father, grandfather, uncle, nephew, cousin and friend. He was known for his quick wit, sense of humor and for entertaining family and friends with his storytelling. He deeply loved fishing and family and often liked to reminisce about how much he enjoyed his childhood. He was a Master Mason and a 50-year member of Recovery Lodge #31. In addition, he was a member of Hejaz Temple and a member of the Greenville Scottish Rite Bodies.

During his very early teen years Mike began working in his father’s business, Blackwell Amusement Company. The motto printed on the company business card said it all: “If it takes a coin, we have it.” Unlike today, the devices of the 1950’s and 1960’s used coins—no green money and no credit cards. Mike became proficient in repairing mechanical devices that were activated by coins. While in high school, Mike delivered juke boxes and pinball machines to local restaurants and clubs and returned often to each business to make necessary repairs and to collect the coins from machines. As a young adult, Mike tried out a short stint working as a machinist at Fiber Industries but soon returned to working with Blackwell Amusement.

On weekends during his high school and adult years Mike also worked at various jobs in the Blackwell family business at the Greenville-Pickens Speedway. He loved working on cars. His parents, however, were not fond of his wish to build his own race car, so that dream was not realized. Two of his favorites were the black 1951 Ford sedan of his teen years and the like-new red Cadillac he bought at age 72.

After the Blackwell family founded the Upper South Carolina State Fair in 1964 at the Speedway, Mike began his own concessions business at the Fair and eventually traveled the East coast with Deggeller Amusement, Deggeller Attractions, and as an independent concessionaire. Until the age of 75, he continued to return each spring, traveling with extensive concessions equipment, to work at the Miami-Dade Youth Fair in Miami, Florida.

Mike was preceded in death by his father, Lewis, and his mother, Edna. He is survived by his wife Lorelle Hatcher Blackwell, his children Teresa Lewis and Michael Blackwell Jr., his brothers and sisters Sandy Blackwell Mitchell (Bill), Phil Blackwell (Martha), Nancye Blackwell Rush and Tommy Blackwell (Louise), as well as a large extended family including aunts, cousins, nieces and nephews.

Due to Covid-19, services will be limited to a private graveside farewell with siblings only at Woodlawn Memorial Park in Greenville SC. A memorial celebration of Mike’s life will be announced at a later date.

Donations may be made to Shriners Hospital for Children in Greenville or to the Polycystic Kidney Disease Foundation (pkdcure.org)