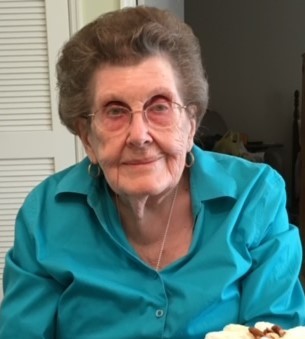 Family will receive friends in the Camellia Room.

Miriam Evans DuPuy, wife of the late Monty DuPuy, died Monday, April 18, 2022. The daughter of the late Mamie Sue Jones Evans and Harry Lee Evans of Sylva, North Carolina, Miriam was born on December 23, 1927. She grew up in Sylva and later moved to Asheville North Carolina where she attended St. Genevieve of the Pines (now Asheville School) and graduated from Lee Edwards High School (Asheville High). After attending Asheville-Biltmore Junior College, she enrolled at the Hussman School of Journalism at the University of North Carolina at Chapel Hill. While at Chapel Hill, she was on the staff of the Daily Tar Heel and was a member of The Valkyries. After graduation, she returned to Asheville and began her career as a copywriter for WWNC Radio where she met the love of her life on December 26, 1948. Miriam and Monty were married exactly six months to the day! The couple relocated to Greenville, South Carolina, where Monty accepted a job with WFBC Radio-TV. They established a home in Greenville, raising their three daughters. In 1978, she and Monty partnered in founding Sound Editions, the parent company of WGXL-FM Radio.

Throughout her life, she was dedicated to her beloved Tar Heels and never missed watching or listening to a basketball game. With her husband, they were active at both Augusta Heights Baptist Church and later at Travelers Rest United Methodist Church. Miriam taught Sunday School to generations of three year old children for over fifty years, in addition to serving as a deacon and in various leadership roles within the church. As recently as two weeks ago, she was leading a Bible Study Group from her church at her home in the Woodlands at Furman. Miriam was a tireless volunteer and advocate for education and service. Miriam was an active PTA and Red Cross volunteer, and served on the board of the Salvation Army. In 1976, she began delivering Meals on Wheels. Together with Monty, they delivered meals for over 40 years, and in 2010, they were awarded The South Carolina Governor’s Volunteer of the Year Award and were finalists for National Volunteer of the Year.

In addition to her parents and husband of 65 years, Miriam was preceded in death by her sister, Nell Evans, and brother, Wallace Evans, both of Asheville.

After a private interment, a celebration of Miriam’s life will be held on Saturday, April 23, 2022 at 1:00 p.m. at Travelers Rest United Methodist Church, 19 South Main Street, Travelers Rest, SC. The family will receive friends following the service at The Woodlands at Furman, Camellia Room, 1500 Trailhead Court, Greenville, SC, from 2:00 p.m.- 3:30 p.m.

The family asks that instead of flowers, memorials be made to Meals on Wheels, 15 Oregon Street, Greenville, SC, 29605; or to Travelers Rest United Methodist Church, 19 South Main Street, Travelers Rest, SC.

Family will receive friends in the Camellia Room.