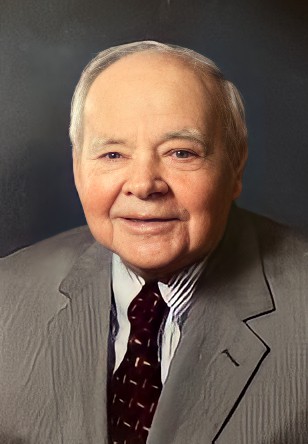 Ray Charles Ballew, Sr., of Greenville, SC, died Sunday, October 24th, 2021, surrounded by his family. He was preceded in death by his wife of 64 years, Patricia Hendrix Ballew. He was born in Greenville, SC, the son of the late Clinton Ballew and Faye Culpepper Ballew.

He graduated from Parker High School in Greenville, SC in 1947 and Furman University in 1951 with a Bachelor of Arts Degree.  After college he joined the United States Air Force where he specialized in Intelligence. He was Honorably Discharged with the rank of 1st Lieutenant in 1953. In 1955, Ray married Patricia Hendrix and started a family.

He went to work for NCR (National Cash Register) and worked diligently to advance in the company in order to provide for his growing family.  Ray possessed a tremendous work ethic and decided to blaze his own trail by opening his own business. He started Sun Vent Awning in 1956 and grew the company to the largest awning company in South Carolina. The business continued to evolve and the name of the business changed to Ballew’s Aluminum Products, Inc. in the 1980’s.

Ray was known to run a very tight ship and expected the very best of his employees while striving to always be the image of a true leader. Along with his wife, Pat, who worked in collections for the company, Ray incorporated his children into the business in various positions in the next forty years which helped grow the business into the success story it is today. Ray achieved the success he had always dreamed of.

Ray was known to be a very proficient and competitive checker player and in his later years he competed, mostly by computer, all over the United States. He and his wife established a residence on Hilton Head Island spending a great deal of time enjoying the beach community and family. Ray had few hobbies due to his very demanding work schedule, however, he did become involved with Kennel Club Shows where he received many awards for his dogs.

Anyone who knew Ray agreed he was a real character with a fiery personality followed by a truly giving heart. His devotion to his family is what drove him to work long hours but with the intention of always making them first in his life. He was a very proud supporter of Furman University where he attended most basketball and football games with his clan. His support earned him the Order of the Paladin for which he was very proud. He remained a Lifelong supporter of his alma mater.

In addition to his parents and his wife Pat, Ray was preceded in death by his only sibling, Thelma Mae Ballew.

Visitation will be held Saturday, October 30th, 2021, from 10:00 a.m. until 11:45 a.m. at Thomas McAfee Funeral Home, Downtown Greenville with the funeral service to follow at 12:00 p.m. in the Downtown chapel. Entombment will be held in Woodlawn Memorial Park Mausoleum.

The Ballew Family Kindly requests for everyone to remember Ray with a big smile on his face and the legacy he built.

To leave a condolence, you can first sign into Facebook or fill out the below form with your name and email. [fbl_login_button redirect="https://thomasmcafee.com/obituary/ray-charles-ballew-sr/?modal=light-candle" hide_if_logged="" size="medium" type="login_with" show_face="true"]
×