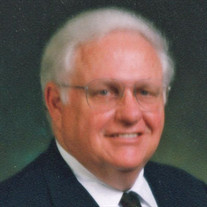 In 40 years of service in the South Carolina United Methodist Conference, Dr. Hunter ministered to five churches and their congregations, representing small and rural, suburban, and large urban communities. His service to the Conference also included holding the position of District Superintendent in Spartanburg and Chaplain and Professor of Biblical Literature at Spartanburg Methodist College, as well as many Conference Boards and Agencies. He was elected to serve at the General Conference and the Jurisdictional Conference. Among many other pursuits, Dr. Hunter was instrumental in developing United Ministries and the Triune Mercy Center.

Following a transfer from the Citadel, Dr. Hunter graduated from Erskine College; however, he always considered the Citadel his alma mater in his heart of hearts. He received two Masters Degrees and one Doctorate Degree from Emory University. Dr. Hunter also received an honorary Doctor of Humane Letters from Claflin University, an institution he cherished dearly and supported as the Chairman of the Board of Trustees for eight years.

A memorial service will be held on Saturday, August 5, 2017 at 2:00 p.m. at St. Matthew United Methodist Church, Greenville, SC. Following the service, the family will receive friends in the church parlor.