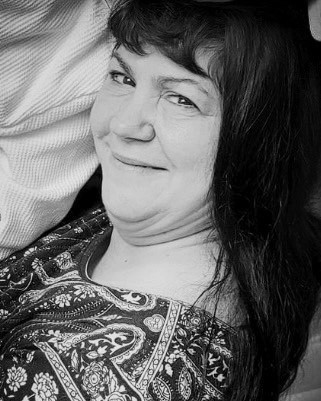 Loved ones and friends wishing to attend the Mass should note that this event will take place in Taylors, South Carolina.

Loved ones and friends wishing to attend the Mass should note that this event will take place in Pinellas Park, Florida.

Born in St. Petersburg, FL, she was the daughter of Rinaldo “Ron” John Fabrizio and the late Carol (Carson) Fabrizio.

She and Mike married on January 16, 1999 and were blessed with a daughter soon after. Therese was able to stay at home, raising their daughter and caring for the daily needs of her family.

She was a faithful Catholic and attended Prince of Peace Catholic Church in Taylors for 14 years. Therese was known in her church community to always bake her delicious raspberry thumbprint cookies or show up with a plate of her famous antipasto salad. She was known for making beautiful handmade wreaths and flower arrangements for people she cared about, sometimes for no reason at all, other than to make them feel loved. She would drop things going on in her own life in a heartbeat to show up for others who needed her, never wanting or expecting anything in return. She was a devoted mother, sister, daughter, aunt, niece, cousin, and friend.

Her faith was steadfast and beautiful to behold, even in her final moments. During the times when her body was failing under the attack of infection and her memory was compromised, she could still be seen and heard murmuring her favorite prayers and asking for intercession of Jesus and Mary.

In addition to her husband, Therese leaves her daughter, Katelynn Rickards; her father, Ron Fabrizio; three brothers, Paul, Steve, and Chris Fabrizio; a sister, Debbie Fabrizio; and several nieces and nephews. She also leaves members of her husband’s family including Aunt Linda Lewis and her sons Dean Lewis and Mark Lewis.

She was preceded in death by her mother, Carol Fabrizio and brother, Greg Fabrizio.

Two funeral masses will be celebrated, the first will be on Friday, January 27th 2023 at 12:00 p.m. at Prince of Peace Catholic Church in Taylors, South Carolina with a rosary thirty minutes prior. Another funeral mass will be held in Florida on Friday, February 3rd 2023 at 11:00 a.m. at Sacred Heart Catholic Church in Pinellas Park, Florida. Entombment will be privately held at Calvary Catholic Cemetery in Clearwater, Florida, on 2/3/2023.

In lieu of flowers, offering of masses, rosaries, and prayers for the repose of her soul would be deeply appreciated.

Loved ones and friends wishing to attend the Mass should note that this event will take place in Taylors, South Carolina.

Loved ones and friends wishing to attend the Mass should note that this event will take place in Pinellas Park, Florida.