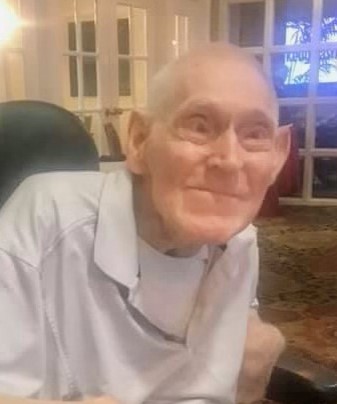 Thomas Alexander Jamison, 84, of Greenville, passed away Monday, June 14, 2021 at NHC Healthcare Greenville, which had been his loving and caring home for the last 29 years.
He was born March 31, 1937 to the late Jerome O. and Sarah McCauley Jamison.

Tommy and his mother moved to NHC when it first opened, and he quickly became a favorite among the staff and the residents – even many of their family members came to know and love him over the years. He loved making his way through the halls in his motorized wheelchair, and always had a smile for everyone he met. He participated in every outing and activity that he could. He was “Mr. NHC” in all ways possible.

In addition to his parents he was preceded in death by a brother, Jerome O. Jamison, Jr. and sister, Violet J. Clayton. Although Tommy was the last surviving member of his immediate family, he was a blessing to everyone he ever met and leaves behind an unsurpassed legacy of love and faith.

To leave a condolence, you can first sign into Facebook or fill out the below form with your name and email. [fbl_login_button redirect="https://thomasmcafee.com/obituary/thomas-alexander-jamison/?modal=light-candle" hide_if_logged="" size="medium" type="login_with" show_face="true"]
×