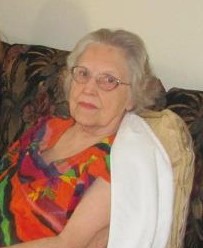 Vera Margareta Jonsson Kennedy, known by most as "Farmor", crossed over to the Swedish side of Heaven late Saturday evening, surrounded by family.

Vera grew up near the town of Järvsö, in a village called Hicklack in Sweden. She was one of seven children born to the late Edna Videan and John Albert Jonnson. They lived in a villa in Skräddars. After her mother passed, most of the family moved to Näset. She was a member of Järvsö Church.

Her sister, Maja, was going to be the one to move to America, but WWII stopped her from doing so. Vera was desperate to go, but was too young. She decided to “correct” her age so she could make the journey from Sweden to America in 1947. She landed in Chicago and stayed with her Aunt Ann and Uncle Ed Axelsson. Again, she fibbed about her age and training so she could get a job at The Sweden House. There, she would do things like accidentally give a customer a bowl of suds instead of spuds…

While on a beach trip with friends, Vera fell in love with South Florida. Deciding it was time for a warmer climate, she moved there in 1950. She met the love of her life, Charles Samuel “Sam” Kennedy, commonly known as Farfar, when she went to the police station for work papers and he was instantly smitten. They dated briefly before getting married and starting a family in Pompano Beach.

Vera and Sam welcomed their first child, a daughter, Chris, then a son, Sammy, and finally Mike Kennedy. Her "other" daughter and son, Carrie and Andy Bailey would join the family in 1981 after they moved to Fruitland Park.

We believe "Miss Etiquette" Judith Martin and Martha Stewart, were both trained by Farmor, as she was by far the best at everything. She was an amazing cook (she tried to teach us all, not many succeeded, but luckily her granddaughter, Stacy has taken the torch); seamstress (started making Farfar’s work shirts, then costumes for school plays, wedding gowns for friends and of course all the latest trends for her kids and her grandchildren); decorator (not only was her home always in “visitor ready” condition at all times, she would have given the Queen of England a run for her money when it came to a table place setting, especially at the holidays); hostess (not only was she ready to host a gathering at any time, she had homemade breads, yummy treats- Swedish sweet rolls, Glögg if you were lucky. She would invite complete strangers into her home and they would become friends- it was much safer back then!) and gardener (fresh squeezed orange juice from the orange trees she grew in her yard, the most gorgeous flowers. To say she had a green thumb would be an understatement. She could make an artificial plant grow. At the age of 84 she’d carry a 50lb bag of soil around the yard to make sure her grass would “grow in the shady spots”). Always up to prank someone, whether it be something silly like switching toothpaste with the Swedish caviar to buying the most atrocious gifts and hiding money in the bottom just to see the reaction once said gift was opened. Never one to sit still, she was always up to something; going to flea markets, yard sales with her partner in crime Carrie, knitting and crocheting blankets for everyone’s babies. Vera was known for her dedication to others and the numerous people she helped care for, and she never met a stranger. She relished the thrill of a good adventure (a trait she passed along to her kids, Chris and Mike and granddaughter, Samantha) she has driven all over the United States in addition to traveling to many other countries.

Her legacy lives on with her loving son, Mike Kennedy of Pompano Beach, FL; her "other" kids, Carrie and Andy Bailey of Clermont, FL; three wonderful granddaughters, Shannon Hill of Seneca, Stacy Sanders and her husband, Jason, and Samantha Kennedy, all of Easley; four precious great-granddaughters, Addie, Lucy, Molly, and Anna Kate Sanders; one special great-grandson, Davis Templin; son-in-law, Randy Wentling, of Anderson; two sisters-in-law, Elin Jonsson, and Ingrid Alberston; nieces and nephews, Els-Mari, Berit, Stefan, Tommy, Marita, Margareta, Brigitta, Erik and their families, all of Sweden; and so many special friends she met throughout her lifetime.

The family would like to extend a special thanks to everyone at The Willows of Easley (or as Farmor called it, Vera's Villa) for the love and care, and possible slight favoritism, they gave to her. You made her last 6 1/2 years extra special from the independent apartment to the assisted side; we will be forever grateful. Also, a special thanks to all of the nurses from Interim Hospice. Farmor would light up when the nurse would come for music therapy and learned to play all of her favorite Marty Robbins songs.

We will celebrate the 91 years that she circled the sun, in Florida, at a later date and illegally sprinkle her cremated remains (wink wink) per her wishes.

In lieu of flowers, memorials may be made in Vera's memory to Interim Hospice, 810 Powdersville Rd. Suite B, Easley SC, 29642, or to a charity of one’s choice (Farmor supported too many to name!).

Condolences and "Hugs from Home" may be sent to the family be clicking the link above.