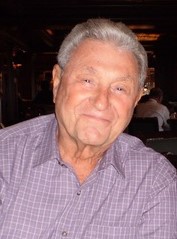 Vern Leonard Skumautz, 88, devoted husband to Barbara Skumautz, went to be with his Lord and Savior on Friday, November 19, 2021.

Born in Milwaukee, WI, he was the son of the late Vernette “Vern” and Hilda Neisinger Skumautz. In addition to his parents, Vern was preceded in death by his son, Vern A. “Butch” Skumautz; grandson, Adam Skumautz; and brothers, Donald Jacob and Neal Skumautz.

Vern proudly served his country for 21 years and was a “hero in battle” while serving in the United States Marine Corps in the Korean War, before retiring from the Air Force as an NCO Tech Sgt in 1972. He was awarded with two Purple Hearts and a Korean Gold Star in addition to many other commendations of service. Upon retirement from his military service, Vern went on to earn a Bachelor’s of Arts degree (Cum Laude) from St Leo College in Florida. He then spent a second career as a Quality Engineer for Honeywell Inc, Paradyne Electronics and Hughes Aircraft Company, retiring in 1996.

Vern and Barbara met in Tampa, Fl and were married in 1983, living life to its fullest over the next 38 years. Inseparable, Vern and Barb experienced many years building a life in love and faith. Vern cherished traveling the world with Barb including visits to Europe, Australia, Hawaii, Mediterranean, and the Holy Lands. These years of travel, which included 3 separate Trans-Atlantic Cruises, brought them great joy and life-long friendships.

Vern inspired all of his family with a passion of patriotic duties, love of sport and competitiveness and faithfulness to family. Vern enjoyed passing on his love for golf, football, basketball, bowling and health and fitness. Being a native of Milwaukee, Vern was always found cheering on his favorite team, the Green Bay Packers. He was a member of John Knox Presbyterian Church in Greenville, SC. Vern was a loving son, brother, husband, father, “Papa” and Grandpa.

A memorial service to celebrate Vern’s life will be held on January 8 at 2:00pm, at John Knox Presbyterian Church, 35 Shannon Drive, Greenville, SC 29615.

In lieu of flowers, memorial contributions may be made to Hospice & Palliative Care Palmetto Region HPCPR.Org. or John Knox Presbyterian Church Memorial Fund. The family would like to recognize the expert and compassionate care given to Vern by the many doctors, nurses and caregivers of Hospice Palmetto Region and The Cancer Institute – Eastside in Greenville.

Condolences and your favorite memory of Vern may be shared with the family by clicking the “leave a message, share a memory” button on the main obituary page.

To leave a condolence, you can first sign into Facebook or fill out the below form with your name and email. [fbl_login_button redirect="https://thomasmcafee.com/obituary/vern-leonard-skumautz/?modal=light-candle" hide_if_logged="" size="medium" type="login_with" show_face="true"]
×