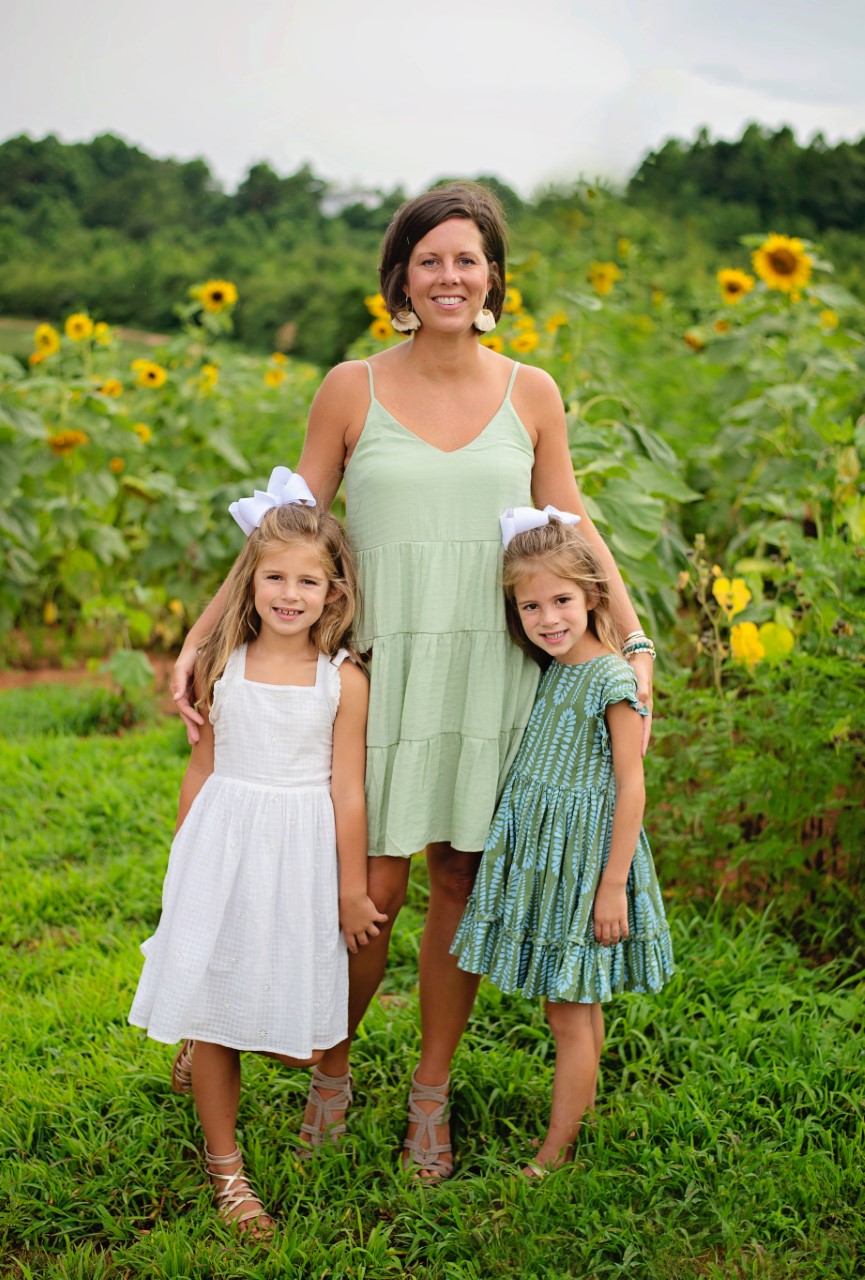 Ashley Marie Bumgardner Thomasson passed peacefully into God’s arms on June 26, 2022. In less than forty years, Ashley created a beautiful life, a loving family, and a powerful legacy that will continue to touch those who knew and cared for her. Ashley was a mother, wife, Christ-follower, teacher, and devoted friend. Her joy for life was evident and undeniable, and she cherished each day God provided her, inspiring those around her to do the same. Both before and after her cancer diagnosis, Ashley embodied faith and heartfelt optimism. She sought the greatest in people, believed the best was possible, and found hope in all circumstances.

Ashley was born in November 1982 to Bobby Bumgardner (Beth Bumgardner) and Gera Lynn Makison (Stan Makison), spending a happy childhood in Lancaster, South Carolina, with her brother, Brett (Megan Bumgardner). She grew up playing competitive softball, even making it to the Little League World Series in Texas and was active in First Covenant Baptist. Whether swimming at the Forest Hills pool, fishing off Springmaid Beach Pier, winning best dance awards, bowling in a league or rocking tweeters in her Honda Accord with pop-up lights, Ashley approached life playfully; her effervescent personality brightened every situation. Ashley’s laughter-filled early years shaped her into the lighthearted, loyal woman we loved.

Ashley came into her own at Clemson University, where she earned her bachelor and later a master’s degree in education. There she developed a circle of friends, a.k.a. “the Clemson cool girls,” who have remained close ever since. Their constantly dinging text chain these days is full of Bible verses and the hectic happenings of busy moms. For half Ashley’s life, these friends learned from, encouraged and inspired one another; they will miss her dearly.

While at Clemson, Ashley also met her future husband, Patrick Thomasson, with whom she was inseparable from their junior year to this very week. And with whom she had no doubt she’d be reunited in heaven. Patrick and Ashley moved to and were married in Greenville, South Carolina after graduation; their fourteenth anniversary would have been this August. They focused the early years of their marriage on building a life and taking adventures as a couple before having children. In that time, Ashley found her ultimate calling as a science teacher both at Northwood Middle School and League Academy.

Ashley’s wit, intelligence, and energy made her an unmatched middle school teacher, and she was fulfilled by making a difference in the lives of her seventh graders. Many an otherwise grumpy, hormonal teen has said that Mrs. Thomasson’s class was their favorite because she made science fun. No one who knew Ashley is surprised to hear this; her bright, inquisitive mind encouraged her students’ own curiosity. However long her day in the classroom, she would return home full of life…and with plenty of stories.

Always joyful, Ashley was most alive around her daughters, almost eight-year-old Ellie Marie and five-year-old Reese Carter. They were the center of her life, and the memories she made with them will never fade. Ashley was determined, even in the toughest rounds of chemo, to ensure her girls knew she loved and delighted in them. She gave Ellie and Reese her full attention, her beautiful smile, and her zest for finding fun in every day.

For 39 years, Ashley lived life to its fullest. She was the friend who was up for anything. The “yes” friend. The lighthearted, lively, life-giving friend. She was a gift to those in her circle and beyond. When diagnosed with cholangiocarcinoma in March 2019, the heartbreak of her diagnosis only deepened Ashley’s thirst for life, faith, and family. She grew immensely, sharing her insights and hope in online journal entries. Whether they knew her personally or followed along from afar, every reader connected with Ashley’s story. Sharing her diagnosis was difficult at first, particularly because she didn’t relish being called an inspiration, but Ashley wanted to show others how much joy she still found in life. That openness made a difference: she touched countless lives with her grace, dignity and perseverance through 3 ½ years of fighting cancer. Her words remained upbeat, honest, vulnerable and full of faith regardless of her circumstances. Even when ping-ponging between Greenville and Houston (MD Anderson) for consultations, surgeries, and exhausting, downright miserable chemo, she remained present and grateful. She appreciated the everyday gifts of snuggling her daughters on the couch or talking with her family on the back porch. In times when she had every reason to feel too depleted or heartbroken to parent, Ashley delighted in having the energy to care for her girls, thanking God for the chance to be their mom.

Selfless and thankful to the end, Ashley said often that Ellie and Reese made battling cancer rewarding. While it’s unthinkable to most, that idea encapsulates Ashley, who found blessings and hope where others might see only suffering. She instilled that same outlook in her daughters while striving to show them all the adventures this world could hold. Ashley’s rare blend of gratitude and gladness can be summed up by her view of a second-grade field trip with Ellie. Plenty of loving parents could grumble about carseats/carpooling, bagged lunch, or hours with overly excited elementary schoolers. Not Ashley, who exclaimed, “I can’t believe I get to do this today!” That was her approach to life: I get to do this.

Everything wonderful about Ashley will live on through her beloved daughters, devoted husband, and everyone she touched just by being herself. She believed that “hope for the future brings power to the present,” and no one could have been more filled with hope and power than Ashley. We are grateful to each person who prayed, commented, cheered in a drive-by pandemic parade, or tried to walk/run 100 miles in a single month to honor Ashley, a cancer patient who was out-walking us all. We know the #allinforAshley community will carry her memory and legacy forward.

In lieu of flowers, please consider donating in Ashley’s memory to Let There Be Mom (https://lettherebemom.org), an organization close to the Thomasson family’s hearts, or MD Anderson Cancer Research