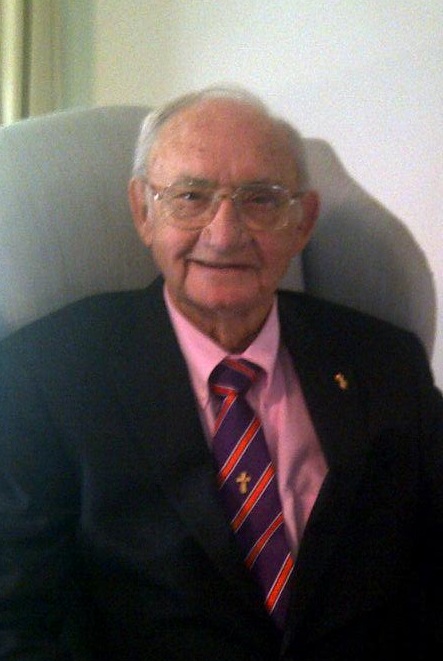 Bill was born in Greenville, SC on March 23, 1925 to the late Ernest A. Ballard, Sr. and Odrell Gosnell Ballard. He is predeceased by his beloved wife of 60 years, Virginia Campbell Ballard. Bill was the youngest of seven siblings, three brothers and four sisters. They have all gone on to eternal rest before him.

Bill graduated from Parker High School in Greenville SC. Shortly following he served in the United States Navy during World War II on the destroyer escort USS Carroll. He defended our country in both the Atlantic and Pacific theaters.

After the war, he met and married Virginia (Ginny) Campbell, and they had two sons, Jimmy Dale (Leah) who resides in Rolling Meadows, Illinois, and Curtis Richard (India) who lives in Easley, SC. He is also survived by three wonderful granddaughters; Connie Chatham (Kevin) of Dallas, Georgia, Aaron Ballard (Gus) of Queens, New York, and Whitney Hook (Doug) of Palm Bay, Florida.

As a young man, Bill worked in the overhead handling business. He began his career at American Monorail Company in Simpsonville, SC where he acquired the nickname “Mr. Monorail.” Because of his hard work ethic, he climbed the business ranks and eventually owned Install Inc. until his retirement at age 70.

Bill spent much of his adult life as an active member of Augusta Heights Baptist Church in Greenville, SC. He served his Lord as a Sunday school teacher and deacon as well as a host of other lay positions at the church. After his retirement, he served as a volunteer visiting the elderly in their homes, hospitals, and nursing facilities.

The family would like to give a special thanks to the wonderful staff at the Palmettos Assisted Living and to the caring staff at Caris Hospice. Your work is eternal.

The funeral service will be at 10:30 a.m. on Monday, November 2, 2020 in the Chapel of Thomas McAfee Funeral Home, Downtown. Entombment will be private. The family appreciates those attending to follow the CDC guidelines on social distancing and wearing a mask. Seating will be limited to allow for proper social distancing.

In lieu of flowers, please make any contributions to The Palmettos at Mauldin, 810 E. Butler Road, Greenville, SC.