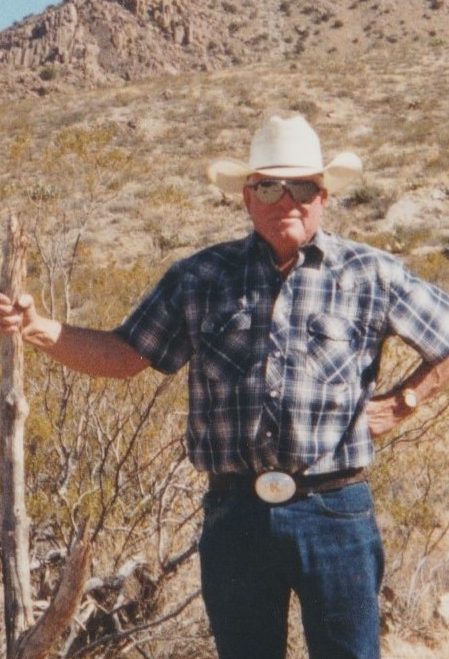 Our family has lost its North Star. Jerry headed for the last roundup with his boots on and in his own home following loving and devoted care from his wife, daughter, son-in-law and grandchildren. Born in the Keeton family home in Cherokee County, Oklahoma, he was raised by his beloved grandmother, Martha Elvira Keeton, along with his many aunts, uncles, and cousins. His childhood was a happy one. He played in the nearby creek, particularly with his Aunt Jewell who was only a few years older than he, and he learned all about farming under the watchful eyes of Uncles Ernest and Elmer. He sang in the quartet at the nearby Free Will Baptist Church and attended Clear Creek School located in the “Keeton Hollar.” In addition to forming enduring friendships during those eight years, he held the school record for riding his bicycle down Buggskuffle Hill backwards at warp speed. When he was ten, his grandmother sent him to stay with his Aunt Naomi who was the telephone operator in nearby Locust Grove. He spent one summer keeping her company, watching the trains go by, and enjoying her delicious evening meals. He rode a school bus to attend Bagley High School in Tahlequah and graduated in 1948. He often told of the old school bus which couldn’t climb to the top Blackburn Hill without the aid of the older boys who got out and pushed.

Following in the footsteps of two of his aunts, Roberta Keeton and Alpha Barrington, Jerry graduated from Northeastern State College in Tahlequah in 1952, majoring in Industrial Education. Upon graduation, he was employed by Kerr-McGee in Tulsa building equipment for uranium mines. In March, 1953 he was drafted and dutifully reported for basic training in Camp Roberts, CA where he was preparing for a tour of duty in Korea. Just days before his deployment, President Eisenhower signed the Armistice with North Korea. He was then stationed in Ft. Lewis, WA with a 90-day maneuver in Alaska to train for future conflicts in Southeast Asia. After his honorable discharge, he served six years with the Oklahoma Army Reserves while he worked in various capacities as a draftsman including designing runways and taxi strips for B-52’s at Boeing in Wichita, KS. In 1959, he received his masters degree in Industrial Education from Oklahoma State University in Stillwater. He was recruited by the Las Cruces, NM schools to teach Industrial Arts at Las Cruces High School, and moved there in 1959 where he became a well-respected teacher and friend to many as well as assisting with FFA and wrestling programs. During this time, he acquired his gold and silver mining property in the Tres Hermanas Region south of Deming where he performed his own core drilling and blasting. After seven years of teaching, the mountains of Ruidoso called, and he moved there to develop Enchanted Mesa Subdivision.

His life was forever changed in August of 1969 when Jerry, the confirmed bachelor, met the Wisconsin farmer’s daughter who recently moved to Ruidoso after being recruited to serve as Ruidoso High School Librarian. It was love at first sight, and he and the former Mary Ellen (Ellie) Betz were married on June 5, 1971 at St. Eleanor Catholic Church with Rev. Eugene Dolan officiating. Together, they developed Homestead Acres, worked side by side at various mining sites, cut wood, and shared a great love for the history, literature, and music of the Old West. Their marriage mantra was, “We may not have it all together, but together we have it all.”

In November, 1977, he began his work at the historic Great Western Mine located at Bonito Canyon in Lincoln County, NM. For over thirty years, he supervised road building and drilling sites, conducted sampling, and served as the local contact person for various mining companies including Superior Minerals, Pioneer Metals, and Barrick Gold of North America. The once prosperous gold mine closed for good in 2010, and Jerry retired at the age of eighty. In the interim periods, he worked with Kenneth D. Huey Co. drilling water wells throughout the Southwest. As a well-known water douser, he located hundreds of wells in New Mexico, Oklahoma, Texas, Utah, Arizona, and Wisconsin over the years.

Jerry was a life member of the National Rifle Association, a Republican, and an advocate of the 2nd Amendment. He was an excellent marksman, and many folks commented he was the best rifle shot they had ever seen. Jerry was also a voracious reader with an encyclopedic knowledge of Southwest, Native American, and Old West history. His artistic flair was showcased in his award-winning photographs, wood sculptures, hand-crafted gun stocks, and in strumming his guitar as he sang songs of the Old West. He was an active member of St. Eleanor Catholic Church in Ruidoso. He was the kind of guy who was always there to lend support whenever there was a need whether it be a church activity, school project, athletic event, or just assisting someone needing a helping hand. Among Jerry’s unique experiences, he served as a pall bearer for Smokey Bear, who was buried in the dark of night at the Smokey Bear Historical Park in Capitan, NM in 1976.

Jerry and his family enjoyed many years of camping especially sleeping out on the banks of the Gila River, listening to the elk bugling while camped out at the Great Western, hunting, music, gardening, exploring the wide open spaces, traveling and simply treasuring the little things in life. After years in New Mexico, they, along with their family, moved to Spartanburg, SC in January, 2015 and eventually moved to their new home near Greenville. Jerry and Ellie were constant companions in their new adventure in the Carolinas. They spent many days exploring the Blue Ridge and Great Smoky Mountains, enjoying casual times at home, taking in shows at the Newberry Opera House, cherishing new friendships, sitting on the deck listening to music, and best of all living close to their daughter, son-in-law and the two grandchildren which gave them many fun-filled daily visits and weekly sleepovers with Papa and Nana. His big Oklahoma smile, bright, blue eyes, and storytelling charm will be missed.

Given Jerry’s connection with water and should you desire, kindly donate in his memory to Cross Catholic Outreach, an organization which drills and encases wells and installs pumps to provide clean water in impoverished communities throughout the world: crosscatholicoutreach.com (choose the “water” option)

Or if you wish, please help a child in need in his memory by donating to St. Jude’s or Shriners.