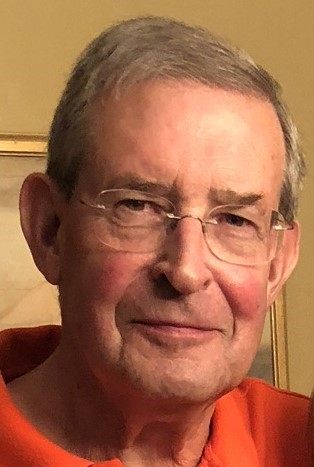 James T. “Bumpa” Slater III, 78, passed away peacefully on July 14, 2022, after a long and courageous battle with Acute Myeloid Leukemia.

Jim was born and raised in Syracuse, NY, where he played basketball for Solvay High School. In 1965, he earned his Bachelors of Science degree from St. Lawrence University where he met the love of his life, his wife Sharon. With a young family, he altered his career path and decided to go into sales after graduation. Between 1965 and 1969 the family moved several times, finally settling into their first home in Derry, NH in 1969. Their first home also brought the first golden retriever into his life. Jim loved his family and his goldens!

A new opportunity arose in 1973 and the family moved back to Syracuse, NY, which allowed him to be closer to his extended family. Jim was formerly a member of Bellevue Country Club and spent many “sales calls” on the golf course. He spent his career in technology sales specializing in Blue Cross Blue Shield and AAA Travel Club services. Along with golf, he enjoyed playing cards, trout fishing, and being an assistant coach during his son Jamie’s active youth hockey years.

Jim and Sharon eventually relocated in 1996 to Charlotte, NC for tax reasons, Jim claimed, although we all knew the real reason, their grandchildren were there. Throughout his life, Jim was a devoted husband, father, and grandfather, but it was this last role that defined his last 30 years. “Bumpa” the nickname christened by his first grandson, he cherished and loved his grandchildren with all of his being, playing an active and important role in their lives in ways too many to count. It was not until after his first grandchild grew up and left home that he and Sharon decided to move to the Upstate for their retirement, settling in Greer.

“Bumpa” will be sorely missed, but his wisdom, capacity for laughter, joy, and his devotion to family will never be forgotten. He is survived by his loving wife of 58 years, Sharon; a daughter, Wendi Peters (Jeff) of Charlotte, NC; a son, Jamie (Yung) of Bozeman, MT; grandchildren, Dylan Peters (Amanda), Sammy White (Blaise), Isabelle Slater and Madeline Slater; a sister, Suzanne Norman (Rick) of Charlotte, NC, and their children, Christopher and Melissa; several nieces and nephews; and too many friends to count.