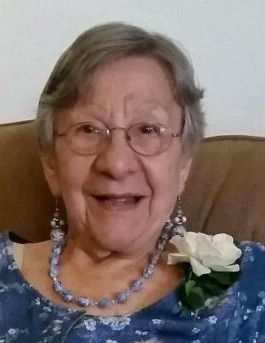 Born in Detroit, Michigan, she was the daughter of the late Peter Porretta and Rosa Tersogni Porretta.

Surviving are daughter, Carol A. Serago of Las Vegas, NV; daughter, Marie A. Farina of West Palm Beach, FL; son and daughter-in-law, John and Connie Farina of San Diego, CA; daughter and son-in-law, Judy and Buddy Bryant of Taylors, SC; and a brother, Marvin Porretta of Los Angeles, CA. In addition, she is survived by her beloved grandchildren of which there are ten and great grandchildren of which there are sixteen.

She was preceded in death by a daughter, Elizabeth A. Farina; son-in-law, Frank Serago, three brothers, Pat Porretta, Sam Porretta, and Louie Porretta; and her sister, Vicki Nader.

Recitation of the Rosary will be held on Sunday, October 25, 2020 at 6:00 p.m. in the Downtown Chapel of Thomas McAfee Funeral Home. A funeral Mass will be celebrated Monday, October 26, 2020 at 12:00 p.m. at St. Mary's Catholic Church with the Rite of Committal following at Woodlawn Memorial Park.

The family will be at the Bryant residence.