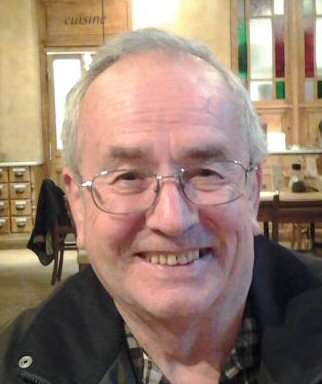 Russell Mark Saulnier, 80, of 7 Blake Street, Greenville, went home to be with his Lord and Savior Jesus Christ on June 2, 2022..

Survivors include his wife, Vivian S. Saulnier, of the home, daughter Karen E. Cabral, son Mark D. Saulnier, and grandchildren Joseph, Kerry, Nina, Mitchell, and Erin Cabral. He also leaves two brothers and their wives: Robert and Grace Saulnier of Kingston, NH, and Allan and Madeline Saulnier of Londonderry, NH, several nieces, nephews, in-laws, and many friends. He was predeceased by a sister, Marie D. Saulnier.

Mr. Saulnier grew up in Salem, NH. A graduate of Woodbury High, he went on to acquire a bachelor’s degree in Education from Keene State College and a master’s degree in Science and Mathematics from the University of New Hampshire. He was one of the first teachers chosen for the pioneer teaching program at Timberlane Middle School, Plaistow, NH, in the mid ’60s. After leaving the field of education, he held several positions in advertising, insurance and automotive sales in Massachusetts and California. His natural ability in sales inspired him to go into business for himself. For several years he ran the Sewing Machine Service Center in Plaistow, NH, before relocating to River Street, Haverhill, MA.

After moving to South Carolina in 1990, Mr. Saulnier worked for Digital Equipment Corporation, Kemet Electronics, and Carolina Circuit Boards. In 2006 his retirement from Nutricia allowed him to devote full time and energy to real estate, an area in which he was especially gifted. He soon established his own company, Solid Ground Realty, primarily focusing on West Greenville properties.

A resident of Greenville for 32 years, Russell loved the city and frequently spent time walking downtown with his wife and 3 cairn terriers. He and his 1928 Model A Tudor were almost a fixture outside the Poinsett Hotel. As unofficial “ambassador,” he would engage visitors in conversation and enthusiastically promote the special qualities of Greenville. Frequently these conversations led to discussions of a more spiritual nature and deep friendships were formed.

Russell was also a Friend of Bill and was always reaching out to help others, whether it be on a personal or business level. A profound spiritual experience at age 40 turned his life around and he was not ashamed to identify that moment as an encounter with Jesus Christ. While serious about life, he had an incredible sense of humor. His quick wit made him a favorite of grandkids and endeared him to friends and associates. He was an avid, voluminous reader with an almost Renaissance knowledge of all major disciplines. Having a firm grasp of history, science, mathematics, and philosophy, he was able to converse on a multitude of topics and impart knowledge through interesting facts that illustrated and substantiated his point of view. He had a knack for working with people, winning them over with respect, reason, and humor. He was a man of great generosity, a self-described “simple country boy,” who left an enduring mark on those who were privileged to know and love him.

In lieu of flowers, memorials may be made to EI School of Biblical Training, located at 700 N Parker Rd, Greenville, SC 29609, or online at www.eibibleschool.org, or to any pro-life organization.